A Master Falconer's Extraordinary Life with Birds of Prey 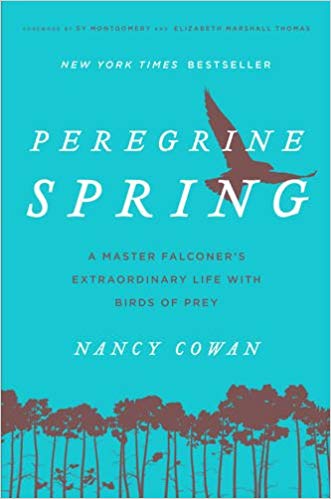 Peregrine Spring, Nancy Cowan’s memoir of her thirty years of living intimately with raptors, gives us a new perspective on the relationship between humans and the natural world. Her stories from those years include explaining how to maintain a working relationship with creatures often called “modern dinosaurs”, her experiences running a falconry school and her reflections upon lessons learned from her birds. From retrieving her falcon from the local police “lock up”, fielding investigation by Federal operatives, to a heartbreaking chase over the streets of a country town in an effort to save her young peregrine from attack by a wild hawk, Nancy’s life is a constant, ever-changing adventure. Her book is unique on the subjects of raptors, falconry, and wildlife.
Living in partnership with the raptors she flies has taught the author each of her birds is an individual. Nancy’s birds have taken her so much into their world that she has found herself adored and protected by a Red-tailed Hawk, courted by a Goshawk, and bossed about by a Harris’ Hawk. The book carries her readers along, so that they, too, meet hawks and falcons in a way they never imagined possible. Peregrine Spring, published by Lyons Press was named to the NY Times Bestseller list and was awarded “Best Book of 2016” by the New England Outdoor Writers Association.

“Nancy Cowan's Peregrine Spring is the best narrative of a modern falconer's life I know. It’s not a how-to, though you can learn plenty from it. Nor does Nancy pose as an all-knowing 'Master,' though she is a master—or mistress—of our ancient practice. What she does give us is a falconry pilgrim’s progress, from beginner to teacher, with all the thrills and delights and sometimes horrors that accompany the journey. I plan to give this book to every person who approaches me and wishes to become a falconer. It’s essential.”

Steve Bodio, author of Eagle Dreams, Rage for Falcons
“How could anyone relate to a creature as cold and emotionless as a bird of prey?” asks Nancy Cowan in this marvelous book. She answers in stories steeped in admiration, learning and love. “I have to do this right,” she tells herself about falconry. And she does. She gets her wordsmithing right, too, showing us the hearts of hunters in clean, feather-elegant prose that borders on poetry. Thank you, Nancy. My library is enriched by Peregrine Spring."

Kim Heacox, author of The Only Kayak and Rhythm of the Wild, Jimmy Bluefeather

Peregrine Spring is available in many local bookstores.

Purchase a Copy of Peregrine Spring on Amazon

Enjoy a passage from Nancy’s book and enter her world as she flies a wild peregrine she has been rehabilitating for release back to freedom.

Training progressed into the final weeks of July. N-Z’s flights at the Overlook were now routine. With every flight he became stronger and faster. My timing at swinging the lure had to be just right since all our flights ended with N-Z coming down for a pass as I tossed it high into the air. He would hit and bind to it, riding it down to land and feed. Most days we were working in absolute synchronization . Some days, however, things did not go as planned. These were the days I learned lessons about falcons and the flying of falcons.

One such day I climbed the hill on a bright sunny morning, then turned to make the short walk down the pathway at the center of the field to the spot we normally began flying. I set N-Z on our accustomed boulder, stepped away as I pulled out the lure for one swing, and quickly tucked it under my armpit as the falcon rose and began ringing up in increasingly wide circles about me. At that moment a gust of cool, moist wind fanned the back of my neck. I turned to see an enormous black cloud had blown up behind my shoulder. There’s an inside joke shared by New Englanders: If you do not care for the weather here, wait five minutes, and it will change. I had been paying attention to N-Z, not to the sky. As I had walked to our spot, this storm had been quickly brewing and was now boiling over the ridge at my back. It was headed straight for us, and within moments the sun was blocked out. Big wet drops began to splash down.

My first reaction was to blow my whistle and swing the lure. I wanted to get N-Z down before the deluge hit. He immediately came back in a tighter circle around me and paused between wing beats to look at me, then took off to circle again. The spattering raindrops increased to a steady shower. He came back and seemed to hover over me fifty feet in the air before making a half-hearted stoop from which he immediately pulled out. On the third circle he cast me a look, then took off for the cover of the big pines, where I saw him land on a high branch sheltered by thickly needled limbs above it. By now I was already as soaked as if someone had emptied a barrel of water over me. I had no desire to become a human lightning rod in the open field so I decided to sit down. There was nothing to do but wait for the rainstorm to end. I could see N-Z’s silhouette perched in the pines. Obviously one of us had enough sense to come in out of the rain, and it wasn’t me.

Rather than contemplate how wet I was getting, I thought about what had just happened. N-Z had been responsive to the whistle and to the sight of the lure but had not come down. He had attempted to do so more than once, which indicated a frustration on his part that he could not accomplish what he wanted to do. It worked itself out in my brain as I sat; I realized N-Z had not been able to overcome his instinct not to land in a rainstorm. Of course, it was falcon common sense. If he had become soaked on the ground, how would he have been able to elude some predator or other danger?

The sun shone again, and all across the field and valley below, steam was rising in the summer’s heat. Despite the mist I could see N-Z plainly where he was perched in the pine, but now he was facing in the opposite direction. I saw him bob once or twice and then launch out over the valley. His flight took him past Hedgehog Mountain and out of my sight. I held my breath for a heartbeat or two, but he did not reappear. Well, I thought, N-Z was due to be released in a week or so. He just moved the timetable up a bit. I had hoped to have a small ceremony for the release, but N-Z had released himself and I wasn’t sorry. If he was ready to go, so be it.

I began climbing the hill along the farm road path, idly swinging the lure as I walked, thinking about the times N-Z and I had flown in this field. About halfway up, I was startled by a sudden noise behind my ear. Whap! As I turned, there at my eye level, with the lure firmly grasped in his talons, N-Z sailed past. He was riding the lure like a magic carpet as he hurtled sideways past my face, giving the situation a clownish air of high comedy. N-Z might as well have had a cartoon bubble over his head that said, Where’d you think you were going without me? His flight down the valley had not been a departure but had been a “drying out the feathers run”.

I knelt beside where he and the lure had landed and caught up his jesses. I must have worn a smile as wide as the field. In the written rules and unwritten contract of wildlife rehabilitation, the rehabber knows attachment to wild animals is not allowed. N-Z had his own contract, however. The precepts of falconry had built a bond I had not expected. I knew that N-Z, once I cut the bond, would return to his wild state with no difficulty. But in the deepest part of my heart, I realized that the bond I had with such a free and perfect creature was a rare privilege. Soaking wet, smiling like a lunatic, I left the field with the falcon I had brought there.

From Peregrine Spring by Nancy Cowan, protected by copyright and may not be reproduced.